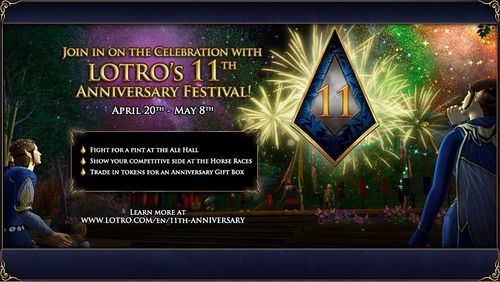 April 24, 2018, marks the eleventh anniversary of the Lord of the Rings Online and as such special events will take place from April 19th 10am to May 14th 3am.
An Anniversary Encore is also scheduled to run from June 7th 10am to June 18th 3am.

"LOTRO's 11th Anniversary is here and we want you to be a part of our celebration! We would like extend a gift as our way of saying thank you for joining us on our journey over the last eleven years! During the Anniversary Festival, which runs from April 20th through May 8th, Premium and VIP players will be eligible to receive gifts based on their account status* as of 11:59am EDT on April 18th, 2018. All active players will be able to participate in our anniversary festivities for their chance to earn rewards!"

LOTRO will hold a Elevnth Anniversary Livestream on their Twitch channel. Join Cordovan and the rest of the Standing Stone Games crew from 11:00 AM - 11:00 PM Eastern (-4 GMT) for a 12-hour livestream celebration of LOTRO's Elevenses!! Featuring interviews, in-game fun, a dig through the archives and more![2]

The festival repeats the events from previous Anniversary Festivals, with the addition of new items including a Sea-ward Steed, Tome of the Beaver, two fiddles and a set of cosmetics based on the Waking Wood. Anniversary account rewards have also been added for accounts created on or before April 30, 2007. An eleventh set of scavenger hunt quests are available from the Party Tree.

Gifts are bestowed to accounts according to Account Status - see References below for a detailed explanation of Account Status.
The gift boxes are automatically placed in the inventories of all characters on the account upon character login, provided there are enough open spaces available. If you did not have enough inventory spaces, the remaining gifts will appear upon the next login when enough spaces are open.
Eligible players will have their new Character Portrait Frames automatically available to your characters upon login. (You must select the frame version to display.)

Amongst the first to brave the depths of Moria

The first to answer the call to arms, you have roots in LOTRO that run as deep as the mallorn trees of Lothlórien

Legends in their own time. Ancient forests and men of old sing songs of your acts of valor.

Grant Dancing Emote (not in Giftbox)

Title Writ - Loyal Servant of Sauron (not in giftbox)
5

Songs of your deeds have traveled far and wide. Rohan, and now Gondor know your name!

Hooded Cloak of the Woodland Realm

Dragon Fireworks (permanent launcher item)
Title: Ever On and On

Pinwheel Fireworks (permanent launcher item)
Title: Despoiler of Elevenses
An 11-year token that can be exchanged at the appearance vendor for a cosmetic trait

All Festival Deeds are found under Race & Social

These are all begun at the Party Tree in Hobbiton from hanging scrolls.

Note: The gift-giving quests reset on Monday and Thursday mornings at 3 am.
Many of the citizens of Eriador are in a gift-giving mood. They request that you deliver a certain item to a person, and in turn, that person asks you to return the favor and give a gift to another person forming a circle of quests that leads you back to the first person. You can pick up the quest at any point and the quests are repeatable every few days.

*Account Status refers to the billing state of the account as of 11:59 PM EST on April 18th, 2018. An account may reflect a billing state of VIP, Premium, Free Player or Suspended Account Status. Rewards will be distributed based on the gift players received the previous year as well as the billing state of the account (VIP, Premium) at the time of account review at 11:59 PM EST on April 18th, 2018. Account must be in good standing to receive rewards. Rewards have no cash value. You may see all of the individual Subscriptions on a single master Account by logging into https://myaccount.standingstonegames.com/. Standing Stone Games' decisions are final and binding on all matters relating to the Anniversary Rewards Program. Standing Stone Games, LLC, is not responsible for lost, interrupted or unavailable network, server, Internet Service Provider (ISP), or other connections, availability or accessibility or miscommunications or failed computer, satellite, telep hone or cable transmissions, lines, or technical failure or jumbled, scrambled, delayed, or misdirected transmissions or computer hardware or software malfunctions, failures or difficulties, or other errors or difficulties of any kind whether human, mechanical, electronic, computer, network, typographical, printing or otherwise relating to or in connection with the Anniversary Rewards Program, including, without limitation, errors or difficulties which may occur in connection with the upgrade of accounts.