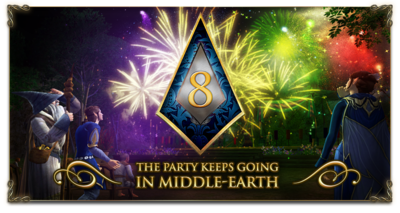 April 24, 2015, marks the eighth anniversary of the Lord of the Rings Online and as such special events will take place from April 15 - April 28.[1] Jointly with the celebration, Turbine will continue giving out anniversary gifts to reward players based on their sign-up date. The festival repeats the events from previous Anniversary Festivals, with the addition of new Mirkwood themed items including the Hooded Cloak of the Woodland Realm, Steed of the Woodland Realm, and Caparison of the Woodland Realm The new festival hub in Bree near the Boar Fountain from last year's anniversary returns, and the Monster drop tokens around Middle-earth, Steel Tokens will drop once again.

Gifts are bestowed to accounts based on when they first went Premium or VIP. The gift boxes are automatically placed in the inventories of all characters on the account.
Characters also receive Character Portrait Frames to customize their user interface.

There are two fireworks show areas, one in The Shire at the Methel-stage and one at Bree Fireworks Area, in northern Bree.

At the Methel-stage, the object of this fireworks show is to shoot off as many rockets as possible within the time limit to appease the crowd. This quest repeats roughly every 10 minutes night or day, much like the dancing quests. You will also find an old friend who suggests that you celebrate by shooting fireworks in many different locations of Eriador.

In Bree, this fireworks show takes place only at night. The player is given four colours of fireworks and the Fireworks Announcer will call out phrases directing which type of fireworks to shoot. You will fail the quest if you fire off the wrong colour firework. During the day, two young Hobbits request that you find good spots to fire off rockets to gather support for the fireworks show.

Many of the citizens of Eriador are in a gift-giving mood. They request that you deliver a certain item to a person, and in turn, that person asks you to return the favor and give a gift to another person forming a circle of quests that leads you back to the first person. You can pick up the quest at any point and the quests are repeatable every 3 days 15 hours.

A strong wind blew away all the invitations that Percy Bywood was supposed to deliver for the Anniversary Celebrations. The quest Lost Invitations is available daily, but can be repeated more often by spending 5 Mithril Coins each time to reset the quest. Envelopes are scattered throughout Bree, both stuck to walls and other objects as well as envelopes blowing in the wind. Envelopes may contain a variety of items including Festival Invitations, Unwanted Messages, Anniversary Tokens, a war-steed cosmetic set and an emote.

The Battle for Glorious Beer

Duke it out in the Festival Arena for a chance to grab the Glorious Beer. Use your Dwarf-club of Unimaginable Power to knock your competitors out of the way. Watch out because your quest for the glorious beer will be over if you get knocked out of the arena.

During this celebration, most creatures will randomly drop tokens which can be bartered for either gift boxes or Marks. The type of token that drops is related to the level of the creature that dropped it. The gift boxes contain rewards such as cosmetic items, food and potions.

The Shire - The Shire Race-track

The following items are available from these Games-masters

The following mounts are random loot from Envelopes during Lost Invitations quest.